Simmons, Sam Horn and the picture

You may have seen earlier today Bill Simmons posted a picture of himself on his Facebook page from long ago. I took that picture in the spring of 1989. If you missed it, here it is. 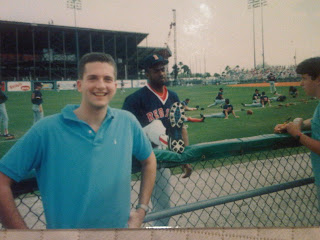 This picture was taken at Orlando's Tinker Field, where the Twins used to train. Bill was visiting me during my senior year at nearby Rollins College. The Sox were in town so we drove over to take in the game. At the time, Sam Horn was thought to be an up and coming stud for Boston. He had only played 70 games but had hit 16 homers, so Simmons was driving the Horn Bandwagon big time. When Horn came over to stretch, Bill gleefully jumped up and had me take his picture next to a "future Hall of Famer."
Around the 7th inning the Sox were winning something like 13-4 so I told Bill, "Let's roll. I have stuff to do."
Bill was not pleased about this. He wanted to go the distance. But I wasn't having it. We were leaving. And since I had the car and knew where the hell I was, the advantage was mine. But Bill thought long and hard about staying behind and trying to catch a cab back to campus. Eventually, as I was walking away, Bill finally caved and came with me.
The next day we pick up the USA Today and Bill is reading the Red Sox notes column. The section noted that "Sam Horn hit one of the longest home runs ever at the Tinker Field, hitting the ball off the upper tier of the Citrus Bowl." Take another look at the picture. Off to Horn's left you can see the infield dirt. Behind Bill and Sam you can see the Citrus Bowl sitting behind the right field fence.
Horn apparently hit one near the top tier of the Bowl, about where the bottom of the light tower is.
Bill and I have been friends for 30 years. He is Godfather to my oldest son. He is great friends with my father. We were groomsmen in each other's weddings. We are like brothers. But Bill has never, and will never, forgive me for depriving him of the Sam Horn home run.
I can't say I blame him.
Posted by Gus Ramsey at Monday, April 04, 2011