If you missed this today on Metsblog, Tim Byrdak took to the field as The Hulkster for his conditioning drills.
http://www.metsblog.com/2012/02/28/photo-tim-byrdak-as-hulk-hogan/
Posted by Gus Ramsey at Tuesday, February 28, 2012 No comments:

a peak inside Legends House

WWE Network is reportedly working on a show called Legends House. TMZ got some video of some of the guys in "action"...
http://www.tmz.com/2012/02/28/wwe-legends-house-zumba-dance-class-video/
Posted by Gus Ramsey at Tuesday, February 28, 2012 No comments:

I'm sure you are reading all over the place about Gary Carter, his effervescence, his joy of life and his wonderful baseball abilities. All of it is true. Nobody got more joy from his life on a daily basis than Carter, so in that respect I am glad for him and all who knew him, despite the sadness of his passing.
In lieu of trying to add anything to those story lines, I thought I would share a story about Carter that speaks to who he was. 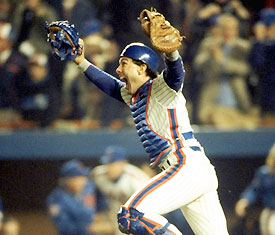 For many years I had the good fortune to produce the coverage of the baseball Hall of Fame inductions.
My favorite part of the weekend always came about 30 minutes before the induction ceremonies started. Two buses carrying the returning Hall of Famers, and the inductees, would pull in behind the huge stage where they would all sit for the ceremony. I would always jump out of the production truck when the buses rolled in and stand where I could see the best of the best walk off that bus. It has to be the greatest bus ride ever, right? I would've paid a lot of money to have a seat on that bus one time, to hear the stories and the digs and all that goes on.
The bus door would swing open and here they would come, Tom Seaver, Reggie Jackson, Yogi Berra, Sandy Koufax, Henry Aaron, Steve Carlton, Johnny Bench... One by one, the greatest the game ever saw, hopped off the bus, adjusted their ties, ducked under the entrance to the backstage tent and got themselves a drink.
Fans were not allowed back in that area, and security pretty much kept everyone at a distance, so there was never any "hassling" of the Hall of Famers. The first year after Gary Carter was inducted, he walked off the bus, sunglasses on and a huge smile on his face as he stopped and looked around a little. A security guard said hello and Gary went over to the man and shook his hand. A few other stragglers, who had permission to be in the area, came over and Carter chatted them up. He stood there for four or five minutes, shook hands, smiled and made the others smile too. Again, I witnessed the Getting Off the Bus Procession seven times, and Carter was the only player I ever saw stop to say hello to a stranger.  At the time I remember thinking "He just can't help himself. He just has to talk to anyone who would listen." It was true, but in a much better way than I first considered. Gary Carter loved life, loved people and loved spreading his joy to anyone and everyone. It's one of the greatest gifts anyone can be bestowed or bestow upon others. After further examination that day, it occurred to me that Gary Carter might be the best of all the people who walked off the bus that day, just not in the way I had originally considered.

I love baseball. It runs through my blood like performance enhancing drugs through the veins of some of the greatest players of my lifetime. I consider Pitchers and Catchers Report Day a holiday. It ranks right up there with Christmas, Thanksgiving and all the greats. As a New England resident for all of my childhood, the day was extra special because it signified the imminent conclusion to winter and the burgeoning hope-filled days that spring delivered, right along with Easter eggs and April showers.

That's the sound of the "Rite of Spring" careening off February's calendar and splattering itself all over every day of the week.
Mets pitchers and catchers are set to "report" on February 20th. The other players are tabbed to arrive on February 24th. Today is February 16th. Do you know what I saw today? I saw video of Ike Davis, Daniel Murphy and David Wright working out at the Mets facility in Port St. Lucie, and it bugged me. It's bugged me for a few years now.
I don't open up Christmas presents on December 17th. I don't eat a big turkey dinner with all the fixings on the third Thursday in November. I get why they do it, I just don't like it. I want to feel like those report dates are significant. Holidays are an event. Pitchers and Catchers Report Day used to feel like an EVENT, not just another day when some more guys showed up or they start getting fined.
So in a few days the media outlets will show the video of players arriving, smiles on their faces, hope springing eternal all across Florida and Arizona as "pitchers and catchers report!"
To me it'll feel like Monday.
Posted by Gus Ramsey at Wednesday, February 15, 2012 No comments:

I feel bad for Gus Johnson. He was the Knicks radio play-by-play guy for a while and would be loving every second of the Jeremy Lin story. Some smart people on Youtube put together what Lin's game-winner against the Raptors might have sounded like if Gus was on the mic.
http://www.youtube.com/watch?v=Xv83mu-afx0
Posted by Gus Ramsey at Wednesday, February 15, 2012 No comments:

It was love at first sight and sound. When Whitney Houston burst on the scene in the mid-'80s, she was the most talented female singer I had ever heard. She was also one of the most beautiful women of the time, going toe-to-toe with Christie Brinkley, Cindy Crawford, or anyone else you want to name.
Her life has been tragic, inspirational and in many ways, unfinished. She was so great, but could have been so much greater. Below is a collection of some links highlighting her endless skills.

here are her isolated voice tracks for How Will I Know
http://jakefogelnest.com/post/17460767716

here is her stupendous debut on the Letterman show in '85.
http://www.youtube.com/watch?v=Df5aaUbRx_s

and of course her Super Bowl National Anthem in Tampa in January of '92. Lip-sync or not, anyone who watched it live, anyone who felt the true emotion of the moment, will likely never forget it. Pre-9/11 it was the most emotional patriotic sporting event other than the '80 USA/Russia hockey game in my lifetime.
http://www.youtube.com/watch?v=wupsPg5H6aE

Ironically Whitney had just finished filming a movie called Sparkle, about a singing family that was struggling to deal with fame and drugs.
http://www.imdb.com/title/tt1876451/

The AA Mets in my back yard?

New Britain, Ct., might be getting the AA Mets in 2013. I'll get to see the future under-achievers before they get to the big leagues!
http://espn.go.com/blog/new-york/mets/post/_/id/37857/report-binghamton-losing-aa-baseball
Posted by Gus Ramsey at Friday, February 10, 2012 No comments:

some good clips from Bobby Valentine interview with Bob Costas talking about his time with the Mets
http://mlb.mlb.com/video/play.jsp?content_id=20087251&topic_id=7417714
Posted by Gus Ramsey at Wednesday, February 08, 2012 No comments:

The Fight That Launched the Feud

I had never seen this video before, so I thought I would share it.
It's from the 1961 Duke/UNC game where Larry Brown was part of a big fight, which some say lit the fuse to the rivalry.
http://www.youtube.com/watch?v=I0RroAH4vwU
Posted by Gus Ramsey at Wednesday, February 08, 2012 No comments:

In the Looney Tunes episode Show Biz Bugs, Daffy Duck performs a spectacular trick which concludes with Daffy blowing himself up http://www.youtube.com/watch?v=lEYYYMuwCyA
As Daffy notes at the end, you can only do it once.

With that in mind, here's my hair brained idea to spice up the NBA All-Star game, but you could probably only do it once.
Begin with the fans continuing to vote in the players, with the top 40 getting invited to All-Star Weekend. They get their All-Star bonuses and all the frills. The two leading vote getters are captains of the two teams. Imagine the voting frenzy as fans try and pit Kobe against LeBron or LeBron and D-Wade against each other! With no Yao Ming in the league, this could be really fun.
On All-Star Saturday night, before the Slam Dunk contest, the captains pick their 13-man rosters. Can you see the drama now? Kobe has first pick and takes Wade, so now LeBron and Wade are on opposite teams. Or LeBron passes on Bosh for Blake Griffin.  Now we've got story lines for the rest of the season like Kobe against the Knicks and Carmelo is still pissed Kobe didn't take him. The possibilities are endless.
If you did the math, then you've already figured it out, we voted in 40 but only 26 have been picked. That's right, 14 guys don't get picked! So besides the bonus of "revenge matches," we now have snubbed guys story lines too! It would be great.
If you really want to get whacky, the 14-man Snub Team has "next." Whoever loses the first half is done at half time and the All-Snubs play the first half winner in the second half. The winner of that half gets the first place winner check, the loser gets second place money and the first half loser gets nothing, giving them some incentive to try and win the first half.

Like I said, you could only do it once because egos would never allow it a second time, but boy, what I wouldn't give to see it just once.
Posted by Gus Ramsey at Friday, February 03, 2012 No comments: