When I was in high school we didn't have iPod's to listen to or cell phones to use, you know, all the typical "we didn't have that when I was in high school" stuff. So when we would play road games, my high school basketball team used to play the Name Game to pass the time. The rules were pretty simple, someone says a name, the next person has to come up with another name that either had the previous person's first or last name. Believe it or not, this was actually an entertaining game.
Example:

A few of the rules:

1) Names like Robert or Johnathon could be used in shortened form, like Bob or John, for first names only. Someone couldn't say Fred Thomas and the next person says Tom Seaver.

2) You had roughly one minute to say a name. This is where it gets fun. Believe it or not, after a while it is actually hard to come up with names. You start thinking so hard you get dumber by the second. At around the :20 left mark, the entire rest of the team would start a simultaneous countdown/clapping deal that made it impossible to think. "20! (clap), 19! (clap) 18! (clap)..."

Again, this was before the internet and the explosion of cable television so the depth of names you had to draw on was severely limited compared to today. For example, this was an automatic game-ender;

In 1985 there were no other Concepcions and no other people anyone had heard of named Onix. Now, with the access to so much information and so many random sports televised, there are too many escape routs. Today you could spend the entire bus trip just going through the Kardashian family.
If you are on a college or high school team, try to convince your teammates to give this a try in the upcoming year and let me know how it goes. Also, anyone else out there have some good travel games your teams used to play while on the road? Share them in the comments section.
Posted by Gus Ramsey at Thursday, July 28, 2011 No comments:

Barry Halper was thought to have the best personal collection of baseball memorabilia in the country. It was all a fraud.

http://www.nypost.com/p/news/local/treasure_trove_is_baseball_history_MQHFNfIYJ2lj2tRkXhIfzH
Posted by Gus Ramsey at Tuesday, July 26, 2011 No comments:

Buckwheat has been shot

I was thinking about this today. At the time, everyone was talking about it. It was the height of SNL comedy. The Buckwheat character had been very popular but reaching the point of jumping the shark. It was close enough to the Reagan assassination attempt that people "got it" without being offended. The Ted Koppel impersonation was spot on. Just a really good conclusion (over the course of two weeks) to a really good bit.

http://www.hulu.com/watch/10389/saturday-night-live-buckwheat-buys-the-farm
Posted by Gus Ramsey at Tuesday, July 26, 2011 No comments:

the Man who can end the lockout

why hasn't anyone called this guy to end the lockout?
http://www.youtube.com/watch?v=_HWQt-w39HY
Posted by Gus Ramsey at Saturday, July 23, 2011 No comments:

The Year o 25 Years Ago- Knight vs Davis

Today marked the 25th anniversary of the great Eric Davis/Ray Knight fight. It was also a remarkable baseball game, featuring Jesse Orosco and Roger McDowell alternating between the outfield and the pitchers mound.  Here is the link to the box score from that game and Mark Simon's column from ESPN NY.Com

Larry David sums up golf for the hacker

if you missed this the other night, the boys did it again
http://www.latenightwithjimmyfallon.com/video/History-of-Rap-Part-2-71911/1341692
Posted by Gus Ramsey at Wednesday, July 20, 2011 No comments:

7 years, $119 million. In January of 2005 that sounded like a lot of money. Heck, it is a lot of money.
That's what the Mets signed Carlos Beltran for back then. At the time, it was considered by most to be extravagant. It was also believed that Beltran didn't want to play for the Mets, but they were the highest bidder so his agent, Scott Boras, talked him into going to the Mets.
At the time I recall having a debate of sorts with former Mets GM, Steve Phillips, about the value of the contract.   Steve's stance was pretty pragmatic, basically the GM perspective that it was way too much to pay for a guy who was not going to hit .330 with 40-50 homers and drive in 130 every year. I remember Steve asking me what my annual expectations were for Beltran. I said something like, "hit .280-.300, 30 homers, score 80-90 runs, drive in around 100." My argument was the Mets needed a bat in the middle of the order who would consistently drive in and score runs. They also needed someone to stabilize their outfield by being an anchor in center field. So if they had to overpay to get someone like that, so be it.
At the time of the signing Beltran was going to be ages 28-32 for the first 5 years of the deal. Those are  classic "in his prime" production years. A common reaction was Beltran got paid so much because of his playoff performance with Houston in '04. In twelve postseason games that year, Beltran banged 8 HRs, drove in 14 and hit .434. It was a mesmerizing performance. It was also a well-timed, national TV submission of his resume.  But again, this was a 28-year old five-tool player whose career averages to that point were .287/.352/.483 with 17 homers and 74 rbi. And he was putting up those numbers on the perennially bad Kansas City Royals. Carlos was going to get paid regardless. October just earned him a few more millions.
In 2004 the New York Mets were barely clinging to the memories of winning the NL pennant in 2000. The Art Howe Era had been a disaster to the tune of 49 games under .500. The Mets primary outfield in '04 looked like this; LF - Cliff Floyd (age 31) CF - Mike Cameron (age 31) RF - Richard Hidalgo (age 29). Their primary backup outfielders were Eric Valent, Gerald Williams and Karim Garcia. That outfield needed new blood more than Eric Northman. What the 2004 Mets did have was a young third baseman named David Wright and a young second baseman (not for long. among the worst decisions ever) named Jose Reyes. Then that winter they inked Pedro Martinez. With those two stars of the future, Pedro and Beltran, the Mets had a foundation the fan base could believe in. Plus, Fred Wilpon had plans for his own TV network and a new stadium. He needed Carlos Beltran, not Mike Cameron, to help make those ventures fly. 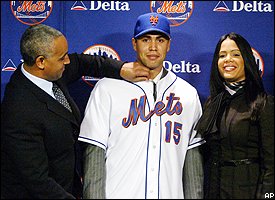 Beltran's first season in New York was disappointing but not completely surprising. With the burden of a huge contract weighing on his every at-bat, with the absurd expectations that he should somehow play like the player America saw in the playoffs the year before, Beltran struggled and put up modest numbers. .266/.330.414  16 HR, 78 rbi in 151 games.
After that season, Beltran spent the better part of the next 3 seasons being the player the Mets, and their fans, had hoped for. As I wrote in my Mets predictions post last March;
"From 2006-2008 he averaged 112 runs, 113 rbi, 33 HR, .278 avg. and WARs of 8.0, 5.3 and 6.8. Even in '09 when he only played half the season, he produced 50 runs, 48 rbi and 100 hits in 81 games. He's been a very productive player who has measured against his contract and not his peers. Beltran was first in RBI for CF over from '06-08, second in runs only to Sizemore, first in HR's and firstt in Slg%."

Unfortunately for Beltran, those seasons were marred by The Called Strike Three and The Collapse. 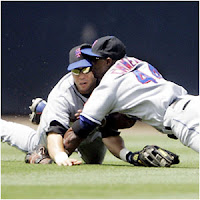 To me, Beltran was a guy who gave his best, was penalized for his "effortless" looking effort and got a bad rap as being soft. After he and Mike Cameron busted each other's faces in the worst collision I've ever seen, Beltran was back on the field 6 days later. He's up there with Reyes, Strawberry, Agee and a handful of others as the most naturally gifted position players the Mets have ever had.

In looking at those numbers, I feel pretty comfortable saying the Mets got more value from Beltran than the rest of those contracts yielded. Admittedly, that does not mean he lived up to the numbers. But, at the time, I remember thinking the Mets had to overpay to get him to come to New York and not be in Yankee pinstripes. They had signed Pedro. Reyes and Wright were on the come. The team was trying to build something. Did the Beltran contract hamstring them from making other moves? I don't think so. In 2006 they were one game, perhaps one Beltran swing of the bat, away from going to the World Series. To me, the window to a Mets run was opening. Turns out it had closed.
In the end, the Mets didn't win the World Series and Beltran didn't put up the numbers that I guess were expected of him. Somehow that called strike three in game 7 of the NLCS hung over him like a one-pitch judgement on his entire Mets career. Carlos Beltran may not be a Mets great, but he was a really, really good Met. His name is littered around the Mets Top 10 in various offensive categories.
He is among the most under-appreciated players in their history.
As of this writing his Mets stats ended up looking like this:
.280/.367/.500 with 206 doubles, 148 homers, 544 runs, 552 rbi and an OPS of .867 in 831 games.

Don't you think National fans would sign up right now for that kind of production from Jayson Werth (7 years, $ 126 mil)? How about Cubs fans and Alfonso Soriano (8 years, $136 mil)?
Was Steve more right than me? Was the Beltran contract a gross overpayment? I guess it all depends on what your expectations were.
What I expect now is that Thursday Carlos Beltran will play his last home game as a Met.
Seven seasons ago the Mets showered him with money. Seven seasons later, I hope the Mets fans shower him with appreciation.