My Favorite Box Score Ever

June 14, 1974.
It happened in my lifetime so it's not THAT long ago, but in the world of Major League starting pitching, it requires two time machines to go back there.
The pitching match up itself was good enough to get the average fan excited. Nolan Ryan vs. Luis Tiant. California Angels vs. Boston Red Sox.
Tiant was coming off a 20-win season and was on his way to another.
Ryan was coming off a 20-win season and on his way to another. He was also in the midst of a 3-season run where his strikeout totals were an amazing 329, 383, 367.
Tiant entered the day on a stretch of starts where he logged 9 ip, 8 ip, 9 ip, 9 ip, 10 ip, 9 ip, 9 ip, 9 ip. He allowed no more than three earned runs in any of those starts. 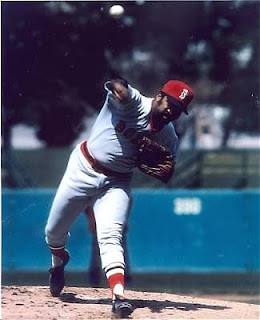 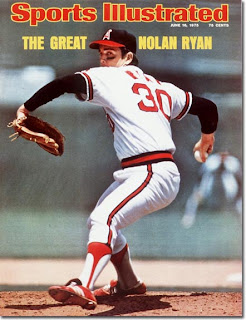 Ryan, as he often was at that point in his career, was pitching erratically, but capable of throwing a no-hitter every time out.
The Express threw 222 complete games in his career. El Tiante,  187. So it's not a shock that they would lock up in a game where they both went nine innings. But then they went ten, and eleven, and twelve and so on...
In a world where pitch count is shown on game broadcasts like some ticking clock of doom for the starter, and where complete games are fawned over, this box score is remarkable. Again, this isn't from 1904, it's from the fairly modern era of less than forty years ago.
So here it is. Look at this box score. Start with the pitching lines and go from there.
http://www.baseball-reference.com/boxes/CAL/CAL197406140.shtml

In an article done by the LA Times on the 30th anniversary of the game, Ryan said his pitching coach had kept track that day with a clicker and that Ryan threw 235 pitches. 235! 10 walks and 19 strikeouts will do that to a guy. Throw in the eight warm-up pitches between innings (104), plus another 50 or so pregame warms-up pitches and Ryan was pushing 400 pitches that day!
Tiant threw 14 1/3 innings only to earn himself a loss. Rob Tracy of the Elias Sports Bureau told me a legitimate formula to use to figure out Tiant's pitch count would be 5.5 pitches per walk, 4.8 per strikeout and 3.3 for everything else. Based on that Tiant's in-game pitch count would be in the 200 range.
The Red Sox lead off man, Cecil Cooper, went 0-8 with 6 Ks. What's the opposite of "setting the table?" Cooper struck out 74 times in '74, so 1/12th of his season total came in this game. It took him 66 at bats after this game to record 6 more strikeouts
Only three Boston players had hits. Hall of Famers Carlton Fisk and Carl Yastrzemski and some guy named Mario Guerrero. Yes, The Mario Guerrero. A career .239 hitter who was 5-12 with 3 walks against Ryan in his career. Who knew?
Carlton Fisk had 8 walks and 12 strikeouts in 36 career at bats against Ryan. None of them came in this game. He was the only Boston starter who didn't have at least one walk or whiff.
Yaz hits a 2-run homer off Ryan in the 9th to tie the game. Where was the closer, you ask? Ryan was the closer. 41 starts that year. 26 complete games. The Angels team leader in saves in '74 was 40-year old Orlando Pena. He appeared in 4 games for a total of 8 innings and lead the Angels with 3 saves.
In the 4th inning, Ryan walks the bases loaded (Yaz, Carbo, Petrocelli), fans McAuliffe, walks Hughes to force in a run, and then punches out the next two (Guerrero and Cooper) to end the inning. Seven batters came up, a minimum of 25 pitches were thrown (but more likely 35-40) and not one ball was put into play!
Top 10, two on and two out, and Ryan fans Yastrzemski to end the inning, one inning after giving up the game-tying homer to Yaz.
With 2-out in the bottom of the 11th, Stanton steals second and takes third on a throwing error, but Tiant gets Hall of Famer Frank Robinson on a foul out to third base to end the inning. Today most managers probably walk the guy with the 550+ home runs and pitch to Joe Lahoud.
Ryan had 16 K's through nine innings and ended eight innings with strikeouts. Only five of his K's were looking.
The game ends when future Tiant teammate, Denny Doyle, hits a walk-off double to score future Tiant nemesis, Mickey Rivers (Rivers hit .364 off Tiant in their Red Sox/Yankees clashes of 1976-1978).
Barry Raziano, who, like Nolan Ryan, was drafted by the New York Mets, won one game in his career. This was it.
11,083 was the attendance. Time of game was only 4:02. I wonder how many were left when it ended.
I wasn't at this game. I've never seen video of it. But looking at the box score tells me the story of an incredible pitching duel from thirty-seven years ago, the likes of which we will never see again.
Posted by Gus Ramsey at Monday, June 13, 2011