The penultimate episode of Breaking Bad was a trap game. It came off an extremely emotional episode and of course came before the series finale. That's like Michigan playing Alcorn State in between Michigan State and Ohio State.
It was a perfectly fine episode that had no chance to be on-par with what we saw in Ozymandias.
Here are some of my thoughts:

The juxtaposition of Walt with his barrel of money living in complete desolation was jarring and depressing. He had spent years building his "empire" which now was nothing more than a cabin with a wood-burning stove and some Ensure. Oh, and to make matters worse, when he went for a walk he did it in a Low Winter Sun.

I was a little surprised by Vacuum Repair Guy's ("That Guy" Hall of Famer Robert Forster) response to Walt when Walt asked him if he would get the money to his family once he died. V.R.G. is being paid handsomely by Walt ($10k for an hour of cards!), doesn't seem to be a thief and clearly relies on his reputation but basically told Walt without saying it, "I'm taking all your money and screw your family." Thought he would be more honorable than that.

I had little to no reaction when Todd killed Andrea. They haven't (thankfully) spent a lot of time on her importance to Jesse and while we certainly felt his pain, it just felt like one more pin in a bed of nails for Jesse.

Still don't have much of a clue who the ricin is for, but I'm sticking with my thought that Walt will take it so he can go out the way he wants. He knows he's dying, so somehow, someway, he'll do it HIS way. In the very first episode of the series Walt is talking to Skyler about his cancer and says to her "sometimes I feel like I never actually make any of my own... choices. I mean, my entire life it just seems I never... had a real say about any of it." From that point forward every choice Walt makes affects his life and the lives of countless others. It only seems appropriate that the final decision Walt makes about his life is how it ends.

I loved bringing back Walt's Gray Matter co-founders as the motivation for him to go back to New Mexico. So much of what has burned the fire in the Heizenberg part of Walt was his ego and pride. He always says what he did was for his family, but so many of his actions were triggered by ego. His bitterness toward Gray Matter had a lot to do with his desire to build his meth business into an empire. The bar scene in this episode was a great reminder for us, and Walt, and gave the dying Heizenberg fire one last wisp of wind to keep it burning a little longer.

I have always felt this show would come down to Walt and Jesse. I think we're going to get there, I'm just not sure how.

Lastly, here's an office pool opportunity: What will be the last shot of next week's show?

I think it starts with Walt having his birthday breakfast, heading to New Mexico, saying "Hi Carol" outside his house and then getting down to business. How it all ends? We'll have to wait and see but one thing is for sure, when it comes to Walter White, we're all going to do the one thing he asked of us... 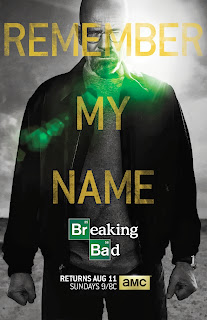