It's Jacksonville's fault and I hate them for it.
Not the city, just their football team.
There was a time as a Denver Broncos fan during the John Elway Era where I expected Denver to win the big games (with the exception of the Super Bowl vs the 49ers). They obviously lost some of them, but I always expected them to win.
None more than the '96 playoff game against Jacksonville.
Denver was 13-3. Jacksonville was 9-7.
Denver had Elway, Sharpe, Davis, the league's top ranked offense and the home field advantage plus altitude. I was not worried. In fact, I was already thinking about a showdown with my buddy Bill's beloved New England Patriots.
But Jacksonville came in full of Jaguar piss and vinegar and shocked the Broncos, 30-27. 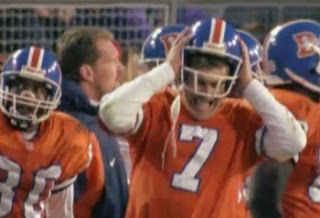 It's because of that game that I go into every Broncos playoff game expecting something bad to happen. Sure, the Broncos have won two Super Bowls since then. They beat the mighty Playoff Patriots in '06. They pulled off the Tebow Miracle last year. All those games were great and I thought before each of them that Denver would lose. Thanks, Jacksonville.
So that brings us to this week. Denver has a top five offense and a top five defense. They have won 11 in a row. The home field advantage of Mile High seems to be coming back. Denver beat the Ravens in week 15 and they will have a short week while Denver had a week to heal. All signs point to a Denver win... if those are the signs you choose to look at  it. But what about the OTHER signs? You know, the ones that point in the other direction.
9-10. Peyton Manning is just 9-10 in his playoff career. Tom Brady is 16-6. Joe Montana 16-7. John Elway 14-7. Hell, even Donovan McNabb is 9-7. Despite all his greatness, is there something about Peyton that makes him more human in the playoffs? Certainly not when he plays the Broncos. Two wins, 800+ yards and 9 TDs on 49-59 passing says absolutely not. But 9-10 is 9-10.
9 straight wins against Baltimore. Peyton has their number, right? I suppose so. But is that 34-17 week 15 win a little deceiving? Manning's 204 passing yards was his lowest output of the season. Baltimore forced Denver into seven 3 and Outs in that game. They average 1.9 3 and Outs on the season. Their third down conversion rate was 31%. They converted 45% of the time for the season. In other words, it's quite possible Baltimore stymies the Denver attack and this game is much closer.
It's going to be COLD on Saturday. The forecast calls for a high of around 20 degrees. As the Denver Post points out, Manning has not done well in cold weather playoff games, going 1-3 in the cold weather venues of New England, Baltimore and New Jersey. Will the mercury serve as Manning's kryptonite?
Or will it be the silent bug-a-boo of the Broncos season. The fumble. Denver has given away the football this year like Hare Krishnas used to give away flowers at airports. Their 14 fumbles lost are by far the most of any AFC playoff team. I dread that one lost ball at the exact wrong time will doom Denver's season.
Vegas says the Broncos are 9 point favorites. Most everyone thinks it's a done deal that the AFC title game will be another Manning v Brady showdown. I obviously hope that it is, but there is the matter of the uneasy 3-hour Angst Fest against the Ray-vens this Saturday. If Denver manages to win that one, wait 'til you see my list of things to be worried about against New England.
Thanks, Jacksonville.
Posted by Gus Ramsey at Wednesday, January 09, 2013