Peyton and the playoffs

In 1985, at the age of 18, I had the pleasure of Dwight Gooden delivering me the greatest sports fan viewing experience of my young life. It was a powerful and explosive 6-month journey that mesmerized me and the entire baseball world. A 24-4 record, 268 Ks and an absurd 1.53 ERA. While in a pennant race he pitched 31 consecutive scoreless innings. 16 of his 35 starts were complete games, 8 were shutouts and he struck out at least 10 batters in 11 of them. His curveball bit hard and sharp like a crocodile and his fastball exploded and rose like a jet taking off from an aircraft carrier. It was breathtaking, it was jaw-dropping and it was the most incredible season I had ever cheered for.
The list of other great FVEs (fan viewing experience) of my life is pretty short. Terrell Davis 2,000 yard rushing season makes the list. Jose Reyes 2006 season (a slight notch below) when he electrified the Mets into the playoffs. And Peyton Manning in 2013.
Davis and Reyes were similar to Gooden in that watching them was captivating. When they were running you couldn't take your eyes off them. Half the fun of the FVE with those two was the anticipation. The moment waiting for T.D. to be handed the ball, take his few steps left or right and then BOOM! explode past Nalen or Schlereth or whoever created the slightest crease for him to blast through. The threat of a TD for T.D. every time he touched the ball was legit.
With Reyes, you waited for him to hit a pitch in the gap or down the line and BOOM! around the bases he went. 30 doubles, 17 triples 19 homers, 122 runs, 64 stolen bases. Every time he walked to the box you expected him to eventually score. When he made contact, once my eye recognized the ball would fall, it would dart to Jose to watch him sprint around the bases with that awkward but blazing stride.
What Peyton Manning did this year was a completely different kind of FVE. He doesn't throw or run like Elway, or even Cutler or Plummer for that matter. His passes rarely light up the radar gun. There are no tales of broken fingers or "Elway Crosses" embedded into receivers chests during practice. His one rushing TD this season was such a surprise there wasn't a Cowboy defender within 15 yards of him as he loped into the endzone. Watching Peyton Manning this season was like watching surgery. With preparation, patience and precision Manning picked defenses apart. It felt like before each game he scooped up the defense like a frog in science class and pithed them before beginning the dissection. The  only explosive thing about Peyton is the way he blows up the record books.
I saw the NFL Network's plays of the year recently. You know what there wasn't a lot of? Great plays by the Broncos offense. They didn't have the "down by 10 or more in the 4th quarter" signature win. They didn't have the "running back breaks 7 tackles and go 60 yards for a score" play. The signature plays from the Broncos season were Prater's NFL record 64-yard field goal, Trevathan's pick of Romo, Adam's pick against the Texans and a slew of record breaking offensive moments. That's what happens when all but 2 of your victories are by more than 7 points. 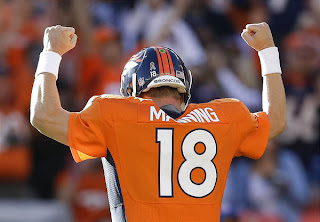 What was really different about Manning's FVE from the others was it wasn't breathtaking it was breath-holding. I spent the entire season holding my breath in hopes Manning wouldn't get hurt because the Broncos championship hopes start and end with #18. When the first half of the week 17 game against the Raiders ended, and Big Brock took over, I finally exhaled. The Broncos were going to the playoffs this year. Everyone knew it. The only way it wasn't happening was if Manning went down. When Ryan Clady was lost for the season in week 2, I took a deeper breath and my face grew a deeper shade of purple. A blind side hit to our aged QB, he of the "more metal in his neck than the Tin Man" status, and you could Osweiler away the hours watching the Super Bowl dreams crumble. There were some scary moments against Indy and San Diego but Manning is smart and when he feels pressure he drops to the ground faster than a zombie hit by one of Daryl's arrows. The Broncos lost Clady, they lost Miller (the 2 most important players on the team after Peyton) they lost their coach for a month, they lost Moore and Bailey and Welker and Vickerson and others, but they never lost hope because #18 made it through the season. So now it's time for the actual season to start. The one Bronco fans have been waiting for since Justin Tucker split the uprights and our hearts.
That's the tricky part of watching a season like Manning had. History will only shine on it brightly if there is a Super Bowl ring dangling from the gold chain of records he crafted this year. 55 touchdowns and 5,477 yards? Those end up just being cubic zirconia if the Lombardi isn't raised in Denver. So while it was fun to watch him orchestrate the highest scoring offense in history, to put up Madden video game numbers and to make it look like flag football, it was all just something to do until we got to January. And now we're here.
The AFC playoff field features 3 teams that beat the Broncos this year. The Colts and Chargers had the most success. After the Indy fans showered Peyton with love, the Colts showered him with hits. He was sacked 4 times, threw a pick and fumbled. The 33-14 halftime deficit was too much to overcome. The Chargers split with Denver but held them under 30 points both games and beat them in time of possession 38:00-22:00 each time. The common denominator with Indy and SD is the Pagano brothers. They seem to have a good idea how to handle the Broncos and likely share thoughts with each other on how to do it. Throw in Mike McCoy's knowledge of Peyton from last year and the Chargers are a scary team to me. As for Indy, they beat Denver, Seattle, S.F. and K.C., and with not much of a running game, Luck will put it up 50 times against a shaky Denver pass defense.
Beating a team three times in a season is never easy, but K.C. is the team I would like Denver to play first. They finished the season 2-5 with their wins coming against Oakland and Washington and their 5 losses coming against playoff teams Denver, SD and Indy. Also, Denver protected Manning perfectly in each game against KC. Yes, Jamal Charles terrifies me, but I think Peyton would have the most success against that defense.
If they move on to the AFC title game, it'll be the Pats. Andy Dalton isn't winning in New England.
What would a rematch with New England bring? Probably something along the lines of a 41-38 game. Both defenses are banged up. Both QBs are too good. Much like the first game, it'll come down to the very end. With the game in Denver, I'll take my chances.
At the start of the year I noted that all things being equal, Denver's o-line health and ability to hang onto the football would be paramount to their success. After losing two centers and Clady, the line has been pretty healthy for the last 6 to 8 weeks. The Broncos turned the ball over 25 times in their first 12 games but only once in their last 4. So those are good signs. Getting back Welker and Rahim Moore will help too.
I've said to a few of my friends that this season is the first I can remember where injuries really took a lot of the fun out of it for me. The thought of what this Broncos team could have been with Clady and Bailey and Moore and Miller and so on... it's a shame we didn't get to see it. The '98 Broncos starters combined to miss 11 games, 5 by Mark Schlereth. This years team has missed well into 60 games for the starters. And it's not just Denver. So many teams lost so many key players, 2013 has been a game of survivor.
After last years loss to Baltimore all Broncos fans compared the loss to the '97 loss to Jacksonville. That loss actually served as a ray of hope this year. The '98 team had a pushing 40, has something to prove QB running a high-powered offense, home field advantage and a stomach-punch playoff loss for motivation. Sound familiar? That Broncos team won the next two Super Bowls. It makes for a nice story. But look at the Cowboys. How many week 17 losses can they have? Flipping the script makes for a nice script, but not always a realistic one.
At this moment, my The Broncos Are Going To The Super Bowl Confidence Meter is at a 7.5 on a 1-10 scale. We'll worry about if they can win it if they actually get there. It's time for Manning to set post season records and ring in the new year with the only ring that matters. It would be a great ending to one of the great FVEs of my life. I'll be watching... and holding my breath.